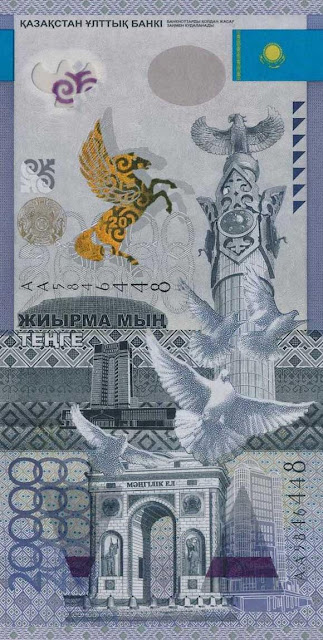 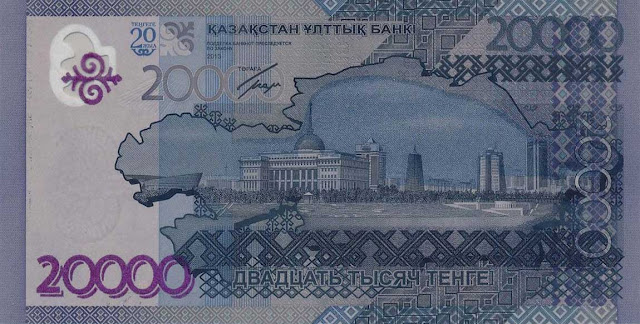 Obverse: prevailing images - vertical. Main image: "Kazak Eli" monument in Astana (representing the "independence of Kazakhstan" and the "Continuation of Generations"), the winged horse, and Mangilik El triumphal arch. On the left at the top of the bill is the winged horse, a symbol used in many cultures, including Turkic-speaking and nomadic peoples, for pure light and life, inspiration and fertility, determination and power. In the middle at the bottom of the banknote is an image of the Mangilik El triumphal arch - an architectural reflection of the idea of the eternity of a free country, the national idea of Kazakhstan as a unified home. In the upper part are the state symbols of the Republic of Kazakhstan: the national emblem and national flag. On the left and bottom is the denomination value written in digits, on the left in the middle - the denomination value written in Kazakh language. The inscription "ҚАЗАҚСТАН ҰЛТТЫҚ БАНКІ" (National Bank of Kazakhstan) is located in the upper left corner, above the inscription in Kazakh language stating that counterfeiting banknotes is against the law: "Банкноттарды қолдан жасау заңмен қудаланады".

Reverse: prevailing images - horizontal. On the reverse side the main image of the banknote is the contour map of Kazakhstan and the panorama of the capital – Akorda, Parliament, and Government buildings, arranged in order by the principle of separation of powers, as written in the Constitution of the Republic of Kazakhstan. Bottom left, top right and middle are denomination values written in digits, at the bottom - in Russian. At the top in the middle of the banknote is the inscription "ҚАЗАҚСТАН ҰЛТТЫҚ БАНКІ" (National Bank of Kazakhstan), as well as an inscription in Russian stating that counterfeiting banknotes is against the law: "Подделка банкнот преследуется по закону".

Watermark: Image of the mythic «Samruk» bird and electrotype: 20000.
Designation: Snow leopard 500.
Predominant colors: gray and blue.
Size: 155 x 79 mm.
Year of issue: Issued in 2013. Since December 2015 in circulation.
Printer: Banknote Factory of the National Bank of the Republic of Kazakhstan, Almaty.