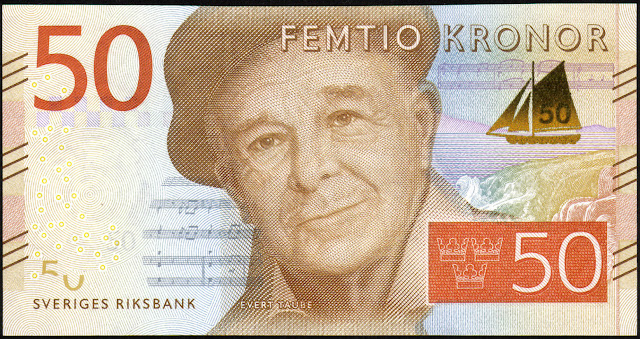 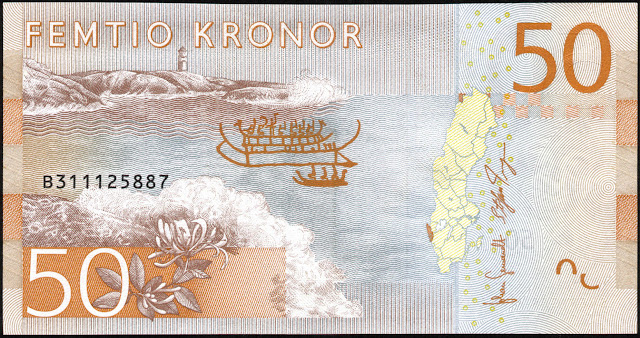 Obverse: Poet, composer and artist Evert Taube (1890–1976) is considered one of Sweden's national poets due to his contributions to Swedish balladry. Portrait engraved after a photograph by Bengt Adin, published in the book Kom i min famn by Inga-Britt Fredholm.
Musical notes on scale - While still the boat sails along: Notes from Evert Taube's ballad Så länge skutan kan gå.
Waltz of Sjösala: Minitext that can be read with the aid of a magnifying glass (from Evert Taube's ballad Sjösala vals, in translation: Rönnerdahl is old but waltzes still. Rönnerdahl has sorrows and not enough sequins. He seldom gets to rest – he has to work for two. How he makes it through the party nobody knows.): Rönnerdahl är gammal men han valsar ändå. Rönnerdahl har sorger och ont om sekiner. Sällan får han rasta – han får slita för två. Hur han klarar skivan kan ingen förstå.
At lower left: Three Crowns (Swedish: Tre Kronor) is a national emblem of Sweden, present in the coat of arms of Sweden, and composed of three yellow or gilded coronets ordered two above and one below.
Denomination as registration device; sailboat gold-to-green SPARK patch.

Reverse: Bohuslän, one of the many places from which Evert Taube drew inspiration. At center: Rock Carvings in Tanum - Rock carving at Vitlycke in Tanumshede, which is included in UNESCO's World Heritage List. Bissen lighthouse - Bohuslän coastline with lighthouse, based on the Bissen lighthouse in Tanum Municipality. Honeysuckle - The provincial flower of Bohuslän, the honeysuckle or woodbine. Evert Taube’s Bohuslän - Map of Sweden with the province of Bohuslän, one of Evert Taube's many inspirations, marked.

Watermark: Evert Taube and electrotype 50.
Measures: 126 x 66 millimetres
Thickness: 125 micrometres +/- 10%
Colour: Yellow / orange
Banknote paper: Manufactured of cotton fibres that are not fluorescent, which is to say they do not emit any light under ultraviolet light (other types of paper may emit a bluish glow).
Banknote numbers: The letters indicate the year in which the banknote was printed. A = 2013, B = 2014 etc. The two first digits indicate where on the printing sheet the banknote was printed. The final seven digits are a serial number.
Printer: Tumba Bruk - Tumba Bruk is the printing company responsible for manufacturing of the Swedish krona banknotes.