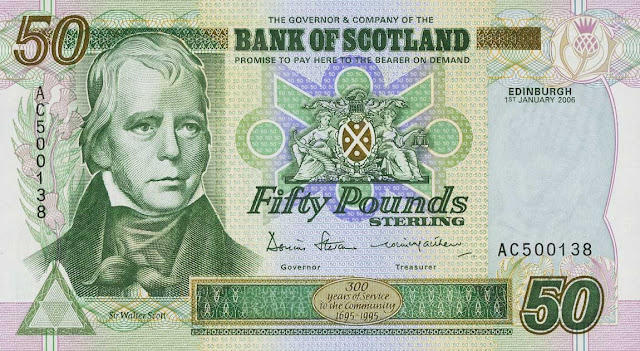 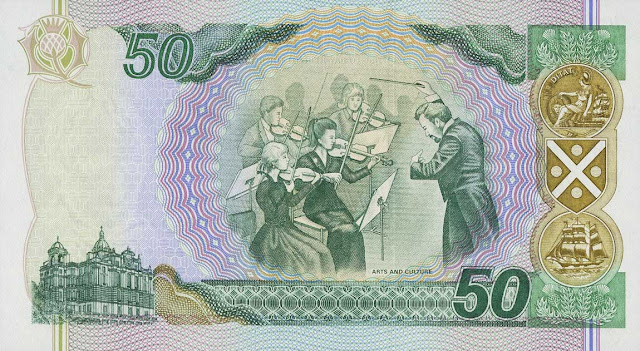 Obverse: Hand-engraved, tonal portrait of Sir Walter Scott. Bank of Scotland Coat of Arms superimposed on the bank's corporate logo at center. Text "300 years of Service to the Community" relating to Tercentenary issue at bottom center. Symbol of Thistle at upper right. Triangular shaped symbol at lower left.
Each note has a unique number which is printed twice on the front of the note, vertical on the upper left and horizontal on the bottom right. Serial numbers consist of two letters followed by six numbers, which are all the same size.
Signatures: Dennis Stevenson (Governor) and Colin Matthew (Treasurer).

Watermark: image of Sir Walter Scott accompanied by the denominational value of the note. When you lay the note on a table the watermark will appear light around its perimeter. The watermark is visible from both the front and back of the note.
See Through: The thistle emblem in the top right corner of the front of the note has white around it when the note is laid on a table. But when viewed against the light the surrounding fills in neatly with colour from the reverse of the note.
Security Thread: The SECURITY THREAD is not visible when the note is laid flat, but when the note is held up to the light the thread becomes visible as a continuous line containing the text 'BOS 50'.
Ultra-Violet Fluorescence: If you place the note under a good quality ULTRA-VIOLET light, you will see highlighted on the back of the note part of the patterns surrounding the vignette and part of the borders of the note.
Denomination Numerals: The number 50 appears near the top left and bottom right on the front and back of the note.